Action Sequences in RPG Maker take a lot of practice to make. Here are some basic attacks to get you started! Copy and paste them into your own project, or use these as a jumping off point to make your own!

Terms of Use:
Free to use in any project, commercial or free, credit optional (but appreciated).

If you use these action sequences, please PLEASE show me your project! I would love to see and promote your work, or at least know that someone has been helped by this!

Check out my other action sequence work!

Thank you for this! It was really helping me for my game:

thank you for your work!

I tried opening the file and there was no common events for me to find and uses sadly :c

Is there a video guide for this?

I also tried opening the sample project but it refuses to open...

Hi, I just redownloaded it and I was able to see the common events and the sample project worked fine. Maybe try redownloading or unzipping again?

Hello! This is fantastic work. Thank you for sharing it with all of us! :)

Just one quick question: For [Input Attack], it seems that after the timer turns to 0, the battle forcefully ends, and exits regardless whether the battle is over or not. This includes exiting the battle test immediately as well.

Thank you for letting me know about this! I'll update the AS Pack soon, but in the meantime if you don't want the battle to end when the timer runs out, add a Script Call at the beginning of the [Input Attack] Common Event:

In order to return the timer back to how it normally works, at the end of the Common Event, add:
Game_Timer.prototype.onExpire = __gameTimerOnExpireSave;

By default, MZ ends battles when timers run out. A script call or simple plugin can change this, but I forgot about the default when I made the attack.

Hello! I wanted to say that the action sequences are awesome and helped me understand their possibilities a lot better. Thank you for sharing this pack!

However, in the example project some of the events (dash flip, dash flip all, dash cast) have the run trigger set to "autorun when switch 1 is on". Unfortunately this may cause a softlock when using loops that operate on switch 1. Since the trigger doesn't seem necessary it might be best to change them all to "none". Just thought to let you know so future users don't need to go through the same debugging. :)

Thank you! That's very helpful. I'll put this on my list to update and glad you could make use of some of these!

Thanks again for pointing this out! It is now fixed. You may have saved some people a headache or two!

Awesome, thank you for the quick fix! ^^

Hello! I also want to show my appreciation for all of your work. Thank you so much for helping us newbs trying to struggle through the technical aspects of game making. On that note, I'm trying to do what you suggested and just copy and paste the skills and common events from your download into my project but they aren't working once there. I have the necessary visustella plug ins, and am using RMMZ, but when i use the skills they are just doing a standard attack with no extra movement whatsoever. I know i must have messed it up somehow, but I've deleted and repasted them in my project a few times with no luck. Can you please help?

I tested it out in a new project and it worked. Is your Battle Core plugin at the latest version? Best I can think of is that version 1.45 of Battle Core is when common event keys were created, so anything older than that would not work.

Let me know if this was the issue, and regardless, I'll make a note in my instructions what version is necessary!

Yes indeed! It's working now! I figured it was something simple since from what I can tell no one else was having that issue. Thank you again! Absolutely loving these attacks. My goal is to combine it with HeroicJay's Dualtech system so I can have two or three characters attack at the same time for team combos. Just getting this to work is a huge step and now I can experiment, endlessly. Lol. Thank you again for all your hard work!

Hallelujah it's working! Thanks for finding that weak point in my instructions. I have been thinking about dual-techs and I have one big piece of advice for you: Once Parallel. Good luck and reach out with any questions (and show me if you make something cool).

thank you for making this  for people who can't do it themselves  :) just tried 2 of them for now and it's good :) is it similar to make a skill to check enemies weakness,?

Thanks for the comment! Elemental weakness is a little tricky. Here's a different solution (thanks to Moogle Rampage:

Checking for states is not hard: Use a conditional and do if script:

Another solution (quite complicated but thanks to Nate the Bard is the following:

i'm completely lost i don't understand all of this -_- but thank you for taking the time to reply :)

Might take a little but you can figure it out! Try some more basic stuff first and get familiar with the engine and script calls and feel free to join the Discord if you got more questions.

This so amazing!! Thank you!

Thank you! Hope you and everyone else can use them for something cool.

Great Job!! This will help a ton!

Looks very cool. Hope to see more Action Sequences in the Future from you :) 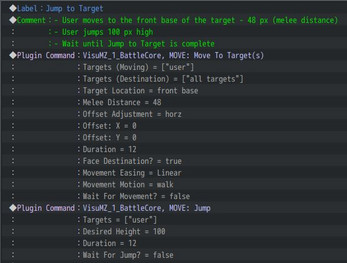